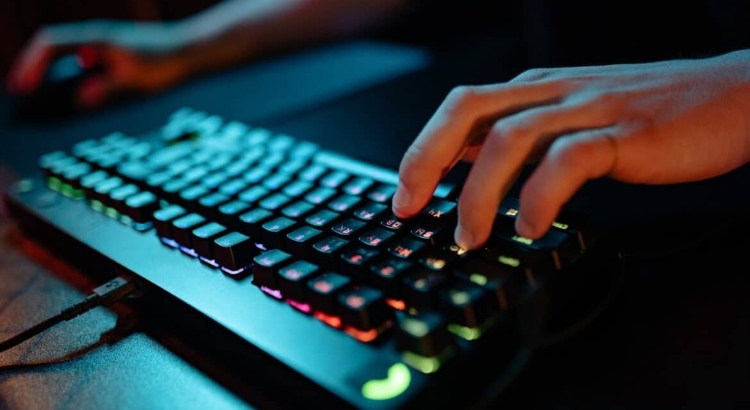 Online Typing Games for Boosting Your Speed and Accuracy

Do you want some training tips to improve your productivity and speed in typing? It’s easy to simply keep practicing by typing a lot of hours each day, hoping to improve your typing speed through experience, but sometimes the best way to get better is to actually learn the techniques and use applications that train your typing skills.

So, if you’re on the hunt for online typing games that can help you with speed and accuracy, you’ve come to the right place. The following are some of the best online games that will improve your typing:

The Best Online Games for Improving Your Typing Speed

God of Word is an online typing game with wordplay mixed into the gameplay. It’s an exciting game set in Greek mythology where you can also learn to improve your typing speed and vocabulary.

In God of Word, you play as an actor whose mission is to recreate famous historical battles for the Olympian gods. The core gameplay includes scrambled word puzzles with typing challenges to defeat enemies. The campaign has 5 acts and 2 endless modes.

Do you want to test your typing skills and play against real people from around the world? Then, check out this free typing game: Typeracer. Typeracer is a multiplayer browser-based typing game where players compete to be the fastest typist possible. Launched in 2008, the game was created by Alex Epshteyn.

The game is basically a racing competition where each player gets a car that advances when the user correctly types words. The first person to finish the track is the winner. During the race, the words per minute are recorded. The player’s all-time average and last ten average are used to categorize the player into ranks: beginner, intermediate, average, pro, type master, and mega racer.

The Textorcist: The Story of Ray Bibbia

If you like typing games, pixel art, and horror games with a sprinkle of adult humor, the Textorcist, is the game to play. An incredibly challenging typing game, this game is sure to keep you entertained whilst you improve your typing skills.

The game consists of battles where you have to dodge enemy attacks while typing words to banish demons. When you fail to avoid an attack, your character drops its prayer book which is the tool used to create incantations. The game is very challenging and is suitable for advanced typists.

10fastfingers is a free online typing speed test game that can measure your typing skills and speed. This game is good for analyzing and improving your typing speed. It also has a scoreboard that you can use to evaluate yourself each time you play the game.10fastdingers is available in multiple languages.

The game works by simply calculating your wpm as you type phrases shown on your screen. The game records your speed and ranks you with all other users who’ve done the typing test. Aside from its primary practice mode, users can also choose an advanced typing test, custom typing test, multiplayer typing test, or typing competition.

Secret of Qwerty is a single-player online typing game with a retro RPG style theme. The game was said to be inspired by “The Typing of the Dead” and “Dragon Warrior”. In the game, you play as a warrior who fights and casts spells by typing words on your keyboard. Your mission is to defeat Qwertz and his four guardians.

The game lets you explore a fantasy world with dungeons, wizards, and monsters. Each successful battle rewards your player with XP and gold—which you can use to buy items to help you on your quest.

TouchType is a simple typing online game to help you type faster and more accurately. The game has two modes, padawan, and survivalist.

Ztype is a fun typing online game that helps you learn how to type faster. Developed by PhobosLab, this addictive online game comes in cute and colorful 2D graphics. It’s great for both kids and adult-type training. What makes it different from other games is that you can add texts to the game itself.

In Ztype you command a spaceship and shoot enemy spaceships approaching your craft. Enemies spawn from the opposite side and can shoot you once they’re close to you. To prevent them from coming closer, you have to successfully finish typing words that appear on your screen. The game has various difficulty levels you can choose from. The objective of the game is to destroy as many enemies as you can and survive various stages as long as possible.

Are you a good typist and an equally experienced karaoke singer? Typing Karaoke might just be the best game made for you. A game that teaches you song lyrics and improves your typing skills, Typing Karaoke is really addictive to play.

The game is simple. Players need to type lyrics to their favorite songs in time to the music. The player progresses through the song and unlocks a world behind them. The faster you type, the bigger the world that is shown in the background.

If you want a simple typing game, Typefighters is the game for you. This game is all about typing. Every task, every move, and even navigation in the interface is done by typing. You can play it alone or with friends over LAN.

Just type the words that appear on the screen as fast as you can to gain points. You can choose to battle it out with AI or a real-life opponent. The winner is the player who scores the most points.

Desert Typing Racer is an online typing browser-based game with a full-on racer car theme. Just like the other typing games, the faster you type and the more accurate you are, the better your scores are in this game.

You start as a driver driving the ‘wrong way’ on a desert road. There are cars heading straight toward you and you have to type words so that cars won’t crash into you. You also have options to jump so you can save yourself before you collide with a car. The jumps are limited and your car can only sustain one or two crashes before you lose.

Cool dog is an online typing game that helps students learn how to type faster. The game character ‘cool dog’ is your primary tutor who teaches you how to type.

The game has a total of three lessons filled with funny paragraphs for you to type. Most of the sentences don’t make sense and are full of typos. You need to copy them as they appear on the screen.

Epistory is an online adventure typing game with an amazing story, voice acting, and 3D graphics. The game revolves around a writer who lacks the motivation to finish his book. He then asks for help from his muse. This is one of the few typing games that support alternate keyboard layouts such as AZERTY, Colemak, and Dvorak. Recently, Typing Chronicles has released a new game called Nanotale. It’s also a typing game but in addition to typing, you also have to solve puzzles and defeat enemies with magic.

As the writer’s muse, you help him gather inspiration and solve mysteries. As you progress, the game world expands and becomes more ‘livable’. All the attacks and controls in the game are controlled by the keyboard.

Slash It 2 is a two-dimensional arcade typing game. By typing letters, words, and numbers at the right time you progress with each match. The game revolves on improving your key pressing reaction time, more than teaching you to type. We also like this game for its cool soundtracks that change with the game modes!

Slash It 2 has six game modes. You can choose the characters to type whether it’s numbers, letters, words, or a mix of numbers and letters. The more you progress, the more difficult the level becomes.

Dance Mat helps you learn the key positions of the letters on your keyboard. It’s suitable for beginners and kids who are still familiarizing themselves with using a computer. It’s a great game for young kids to learn proper hand positioning on the keyboard.

The game has three levels where each level an animal friend shows you the key placements and how to make capital letters.